Organization Urges That Patients With Lung Cancer Worldwide Have Access to COVID-19 Vaccine
“The International Association for the Study of Lung Cancer (IASLC) recently joined more than 100 cancer centers and organizations in requesting that leading public health officials, President Joseph Biden and other members of the administration prioritize the delivery of a COVID-19 vaccine to cancer survivors and patients receiving active treatment.” 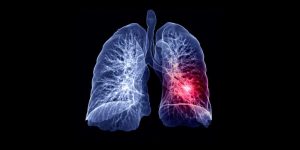 Merck withdraws Keytruda from SCLC indication amid FDA crackdown
“On 1 March, Merck announced the voluntary withdrawal of its Keytruda (pembrolizumab) immunotherapy for the treatment of patients with metastatic small cell lung cancer (SCLC) with disease progression on or after platinum-based chemotherapy and at least one other prior line of therapy.”

Targeted Radiation Hits The Mark For Lung Cancer Patient
“Eighty-two year old Larry Sams sits next to his wife Carol in a conference room where sun streams in at the OSF Moeller Cancer Center in Alton, Illinois and declares he feels special and lucky.”

Palliative Care Considered Beneficial, Though Infrequently Used in Lung Cancer
“Nearly two-thirds of patients with epidermal growth factor receptor (EGFR) mutation-positive lung cancer do not use palliative care, despite many having a favorable opinion of it, according to the results of a patient-centered survey study presented at the 2020 World Conference on Lung Cancer in Singapore.”

A new effect of red ginseng: suppression of lung cancer metastasis
“Development of KIST-maximized ginsenoside (KMxG) using a microwave processing method for ginseng that increase the trace amounts of Rk1 and Rg5. Ginsenosides Rk1 and Rg5 effectively inhibit the metastasis of lung cancer”