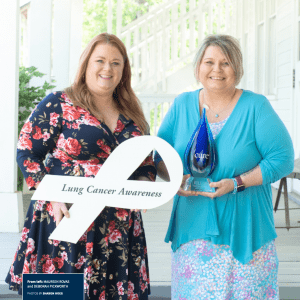 Hope in Strength
“Deborah Pickworth, who is living with stage 4 lung cancer, was nominated for the Lung Cancer Heroes® award for her impact in supporting and advocating for others with the disease.”

Pfizer COVID-19 Vaccine Deemed Safe for Patients Undergoing Cancer Treatment Despite “Lagging” Immune Response in Some Malignancies
“Despite some delayed immune responses, the Pfizer COVID-19 vaccine appears safe and effective in patients with cancer who are receiving treatment for their disease.”

DFCI’s Jacob Sands Discusses All Things Considered About Lung Cancer Screening
“Sands ,a medical oncologist who specializes in lung cancer, says the false discovery has been misconstruted as a false positive rate. He also makes a case for early detection and new USPSTF as working to correct disparities.”