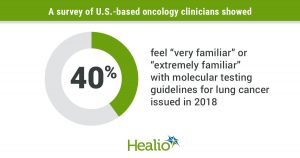 Patients With ALK+ NSCLC Not Suitable for Crizotinib Benefit from Sequential ALK-Inhibitor Therapy
“Patients with non–small cell lung cancer harboring ALK mutations who were not suitable for crizotinib therapy, either due to resistance or intolerance, showed benefit with sequential crizotinib and alectinib.”

Improvements in Radiation Therapy May Confer Better Treatment for Lung Cancer
“Increased use of radiation in lung cancer treatment may be a result of discoveries in research and improved spreading of information on this technology.”